I haven’t written in a while partly because I felt like not that much was happening; little news here and there, and suddenly I feel like I have a ton of stuff to share!

Maggie is another student that is also working on this project right now, and we decided that the best way to tackle the closets is to go through everything, just so we get a sense of what’s there.  In every box we take a basic inventory of what’s inside, noting color, garment type (dress, shawl, pants, etc), and the date it was worn as best we can figure.

She began working in the closet in the women’s dressing room, while I took the men’s.  I tried to be good about announcing my presence before just marching in there, but in my absorption in my work sometimes led to forgetfulness….Anyway!

Over the strike of last term’s show Maggie began to hand wash a number of the pieces from the new donation and Margo brought another batch of it to dry cleaning, so by the time this term rolled around we were ready to go…kinda…

As we were going through and discovering delicate objects I started putting my boxes to work.  I have a limited amount, so I was pretty discerning, but it was clear to see that the boxes were going quickly.

I mentioned this to Margo, who sympathizes better than anyone on this subject, and she brought it up in a meeting with the head of the department.  She and Liz decided that a portion of the equipment budget this term/year (?) could go to boxes, so more are on their way!!! (many more than I was able to order originally!!) Again, I am blessed by the investment of this department in their students!

Another bump in the road is the photo-box.   Here is a link to a professional version:

The textile is a kind of nylon mesh that evenly diffuses light, allowing for better photos!  We don’t have the funds to buy one of these suckers, so instead we decided to make one. Margo and I went to home depot to buy enough pvc pipe to make a box that is 4×7 feet.  We ran around Joann Fabrics testing out the “diffusability” of various fabrics before we settled on wedding crinoline fabric.  I put together the pvc in the costume shop and the giant frame sat there for a couple of weeks, generally puzzling everyone who came into the space.  Here are some pictures of me trying to put it together:

Next, Franzi took the fabric we bought and stitched it according to the “brilliant” plan we had come up with, using pockets in the fabric to slide the pvc, so that the inner seams were neat and invisible!  Max, Franzi, and I wrestled the pvc into this first manifestation with great difficulty (not pictured).

It was immediately obvious that it was too big.

It would have taken too long to alter one seam, sew it on the machine, put it all back together, and then work on the next seam, so I knew I had to do it by hand.  Also, when Craig heard about our difficulty he bought us some “pvc welding” supplies (a primer and glue, heavy on the fuuuuumes). Max, Evelyn, Alyssa, and I worked our assembly-line magic on the pipes, creating 12 long pieces out of the original 36.  Unfortunately, the ends with the joints were then too big to fit into the fabric pockets, so I turned to my good friend Velcro to hold this baby together.  Evelyn kindly took pictures of me doing various alterations:

Today I set up the lights around the box, trying to avoid hot-spots, and create a generally well-lit atmosphere.  Here is Analise kindly acting as my first vict–Model….

On the left you can see all my hot-spots (bad), but by the end I had a better time at evening out the light quality. 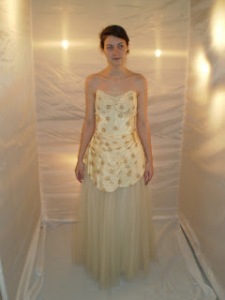 Originally posted on 01/28/11 at my former blog: https://knoxvintage.blogspot.com/

This site uses Akismet to reduce spam. Learn how your comment data is processed.