“WTRX—You’re on the right track!”

For this recreation of a studio from a 1940’s radio show I worked to capture the bold confidence and joie de vivre felt in the United States circa 1945, shortly after victory in World War II.  To accent the age of the period suits and dresses that I pulled and altered I layered them over shirts and blouses in muted neutrals.

I maintained a color palette of earth tones punctuated by mature navys, dark greens, and maroons.

Character choices were made based on the personalities that the actors developed using three adjectives from a workshop exercise. 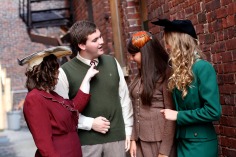 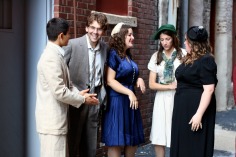 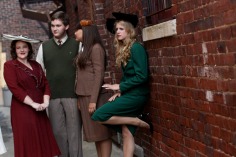 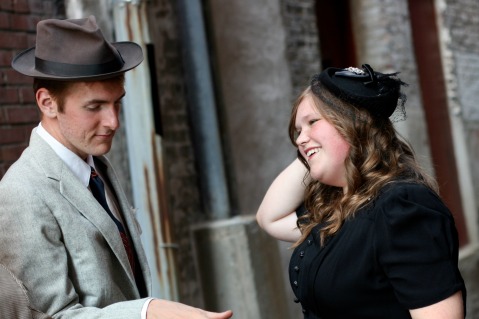 Welcome to My Studio

What to call this? Fabric painting, fabric collage, boro tapestry? I've been working on it for awhile, as an exercise of the imagination. I experimented a few times with the layout of the layers of various "scraps": silk dress remnants, curtain, paisley jacquard, velvet ribbon, burnout velvet, felted wool. I tried to see it as play, not a Project, but honestly it took me so long that I finally just sat down and worked on it for a week straight just to finally be done. 😆 . . . #textilerecycling  #creativereuse #lowwaste #textilescraps #recycle #fightdisposability #wornwear #texture #make #diyhome #studioday #makedoandmend #crafts #handmade #madebyhand #fiberart #hobby #sewcialist #visiblemending #boro
I had such a fun time refashioning this huge shirt into a dress/tunic in time for Halloween! The beautiful smile is all Punkie, one of the characters from October Games. If you're into horror video games, check them out!! . #horrornerd #horrorledgends #punkie #octobergamesstudio #horrorfan #videogames #horror #horrorvideogames
Here's a refashion project that I've been tweaking since last summer. Swipe to see it in all it's 1980s glory...I love the bold print, long skirt and *pockets!*, but I wanted it to have a little more classic silhouette. The biggest changes were in the blouse, making less blouson, without losing ease of movement. . . . #thriftstorefind #refashion #sewsunday #studioday #sewcialist
I recycled 2 pairs of jeans to make these beauties, inspired and guided by Valaan Villapaita's darling work. They are even stuffed with the scraps of denim...the only thing I didn't include were the rivets! Swipe for in-process photos. You can see there are some inconsistencies between them, just nature at work! 😁 . Tutorial: https://valaanvillapaita.blogspot.com/2011/05/tee-se-itse-valas.html . #valaanvillapaita #upcycle #denim #textilerecycling  #creativereuse #lowwaste #textilescraps #recycle #fightdisposability #wornwear #recycledenim #refashion #techstyle #make #makedoandmend #crafts #handmade #madebyhand #fiberart #hobby #sewcialist